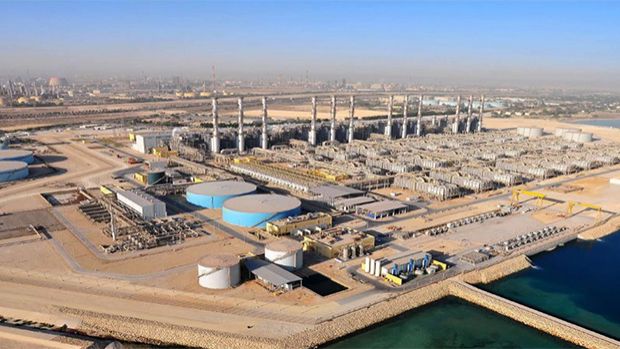 The Task: To meet the power and water needs of Jubail Industrial City, Saudi Arabia, the largest industrial city in the Middle East.

The Solution: ACWA Power International and other shareholders developed the largest integrated power and water desalination facility in the world to meet growing demand at Jubail and the Eastern province cities.

The primary fuel for the plant is natural gas, with diesel as a backup. Each of the four power and water desalination blocks consists of three gas turbines and one steam turbine, forming a combined cycle and nine multi-effect distillation units. Excess heat from the gas turbine generators is fed into heat recovery steam generators to make steam, generating additional electricity to enhance the overall efficiency to over 60 percent, compared with 50 percent in conventional plants.

Steam is also supplied to the desalination plant. The 27 desalination units use the latest multiple-effect distillation technology, which involves heating seawater to boiling point through multiple stages at successively lower pressures, producing vapour that is then condensed to form distilled water. The process optimises use of the thermal energy, delivering 9.85 tonnes of product water for each ton of steam.